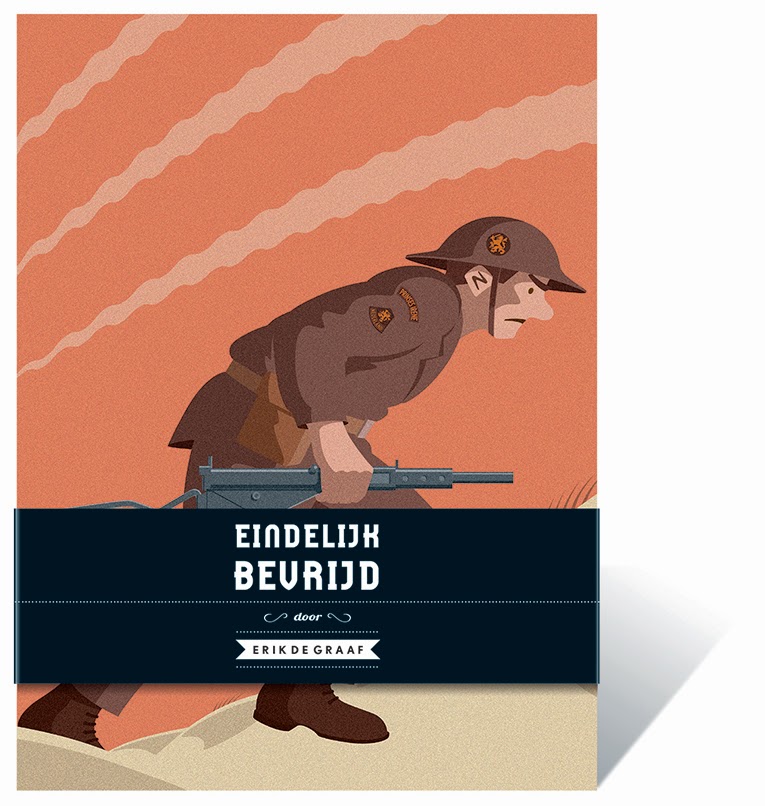 I'm participating in this year's Kunststripbeurs this saturday (21st of march) in the Nicolaikerk, Utrecht.
Doors open at 10 o'clock. Apart from my other work I will bring a special leporello of my short story 'Eindelijk bevrijd'. A numbered (25 copies) and signed edition with some extras. And a signed print for those who will buy 'Scherven'. Hope to see you there!

Written by Erik de Graaf Comics on 12:35 PM No comments: 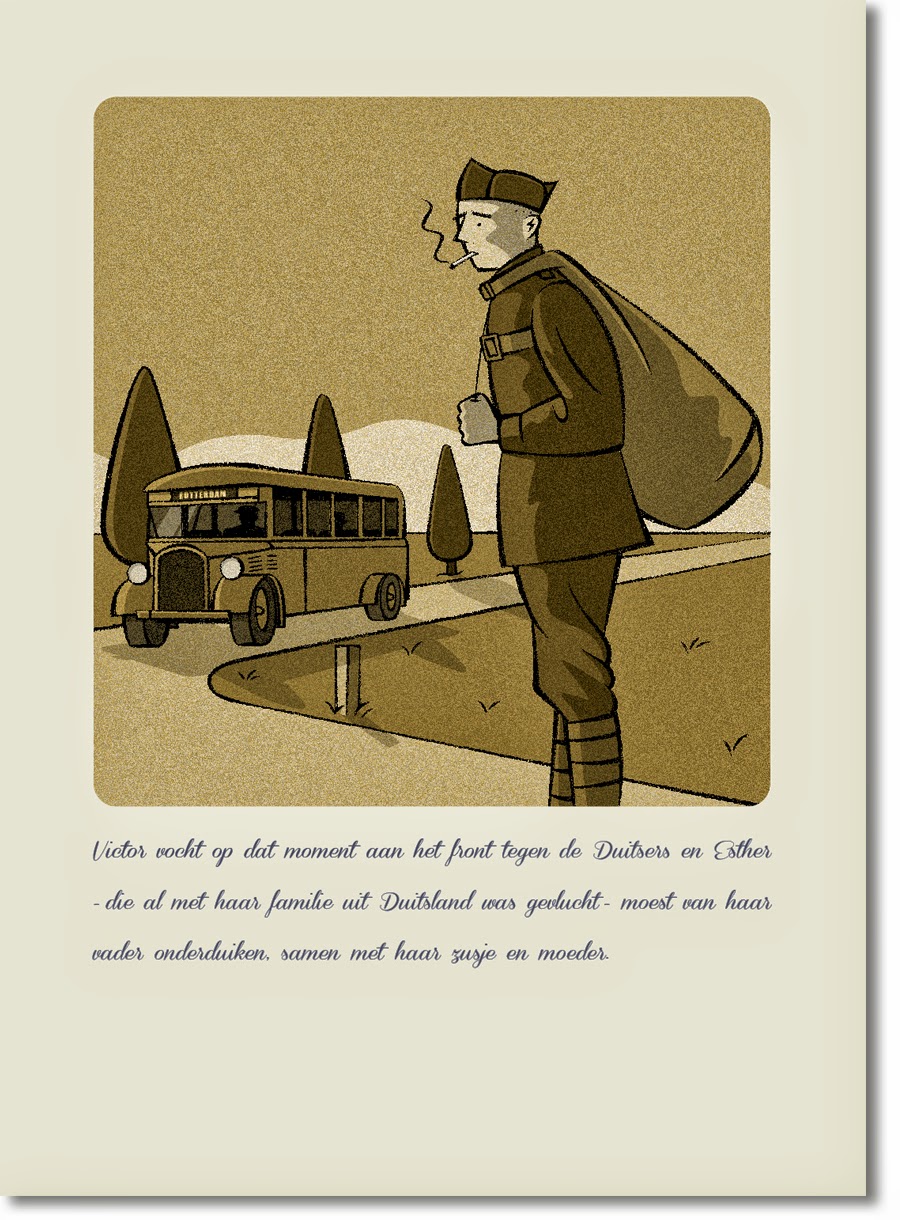 I've started coloring the sequel on 'Scherven', it will be called 'Littekens'. First I've done a prologue, here are some images. 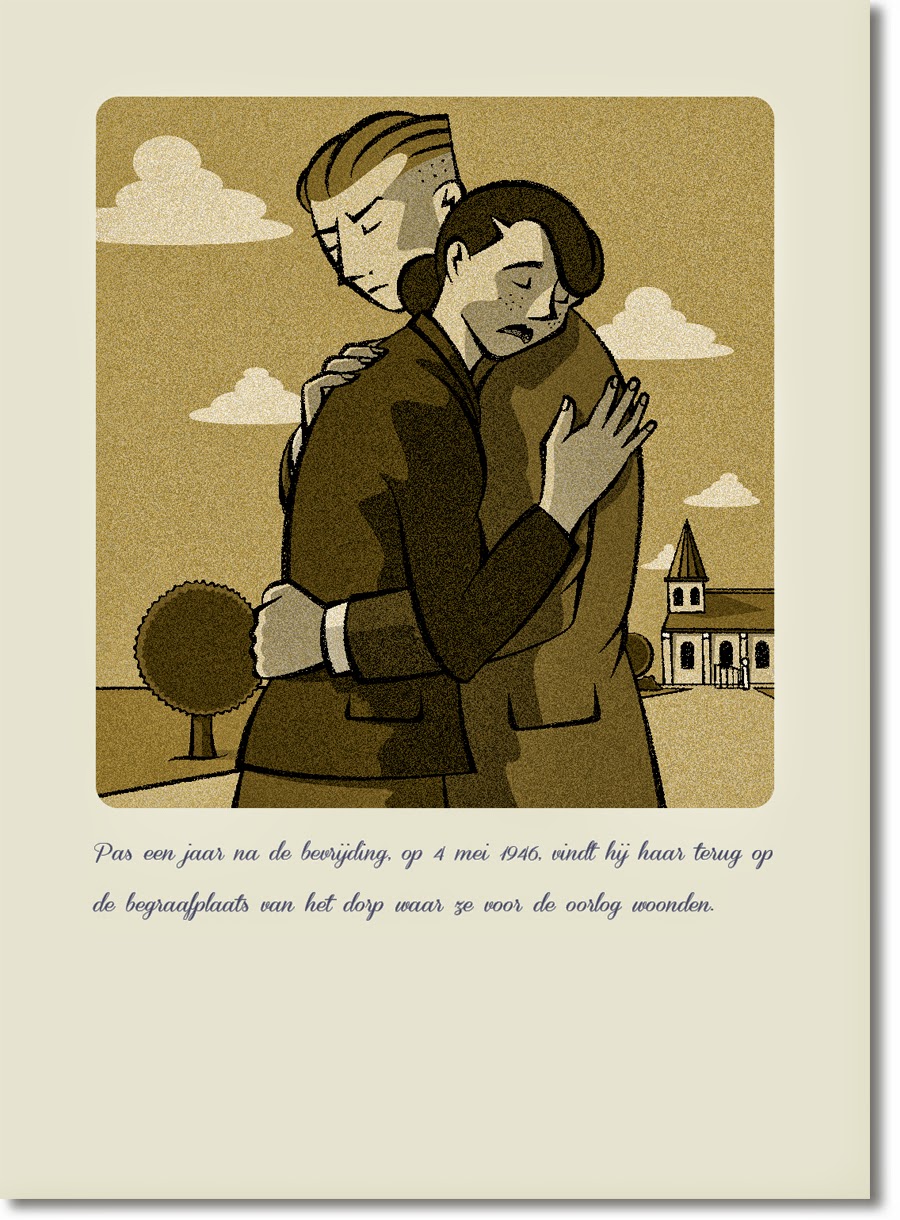 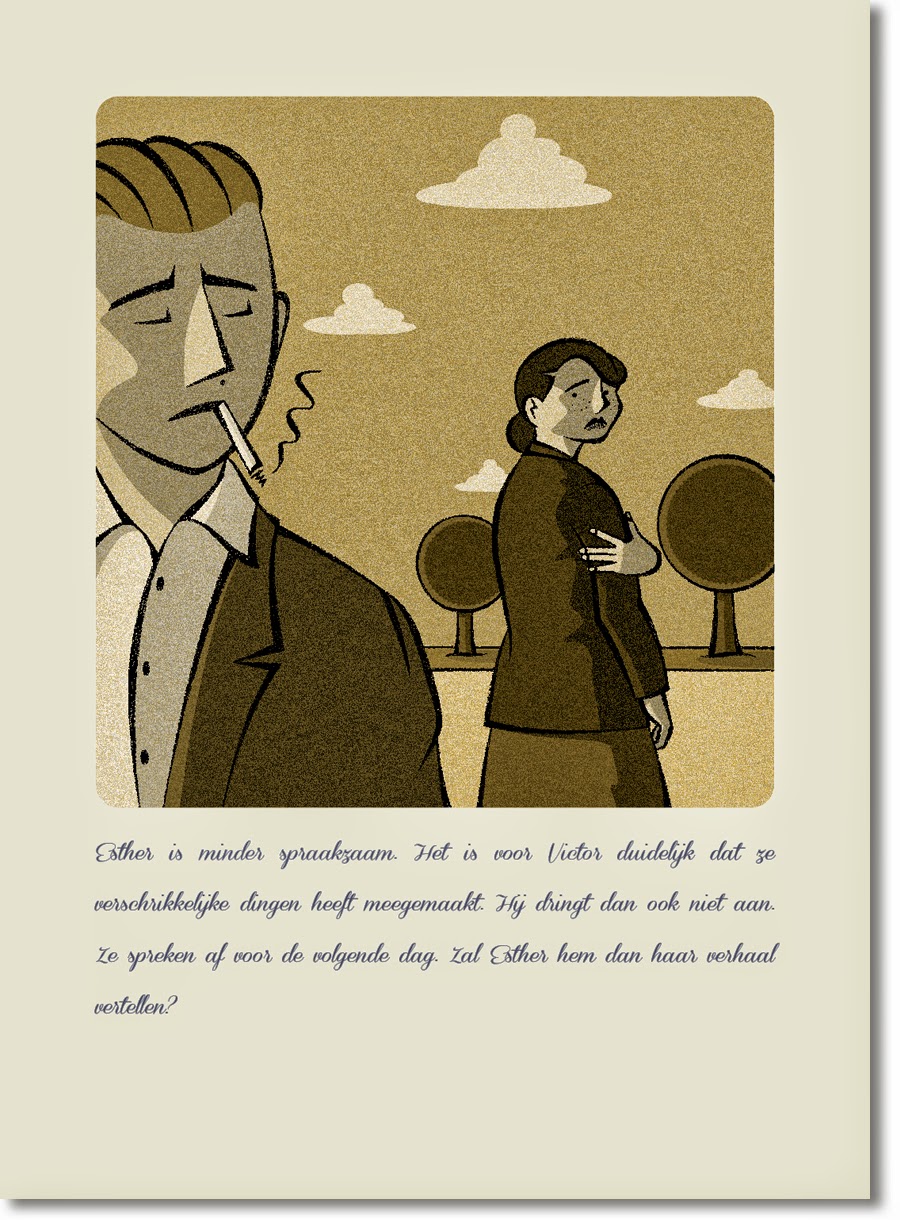 Besides 'Scherven' I'm also working on a smaller project called 'Uit het Laagland'. You could call it a Graphic Letter (instead of a Graphic Novel). The beautiful script is written by Oliver Kerkdijk.
It's a letter from a young man from France, called Vincent, to his grandfather. He is following the track of is grandpa by bicycle from France to the Netherlands. On that journey he discovers the places where is granddad has lived.
The story will be drawn in warm grey with red and blue accents.

Written by Erik de Graaf Comics on 5:35 AM No comments:

October 2014 'Op Missie' was published by Strip 2000. The book contains 10 stories made by 10 authors about War-veterans on a mission. I was one of the participants and made a story about Ton Herbrink. A 96 year old veteran who fought together with the Allied Forces against the Germans and helped to liberate Holland as a commander of the Prinses Irene Brigade.
He never spoke about his war experiences until he visited Nromandy, 40 years later. So my story starts there and is called 'Eindelijk Bevrijd' ("Liberated at last').
Every artist also has drawn his own cover, so 10 stories about 10 war-veterans made by 10 authors in a book with 10 different covers: 'Op Missie'. 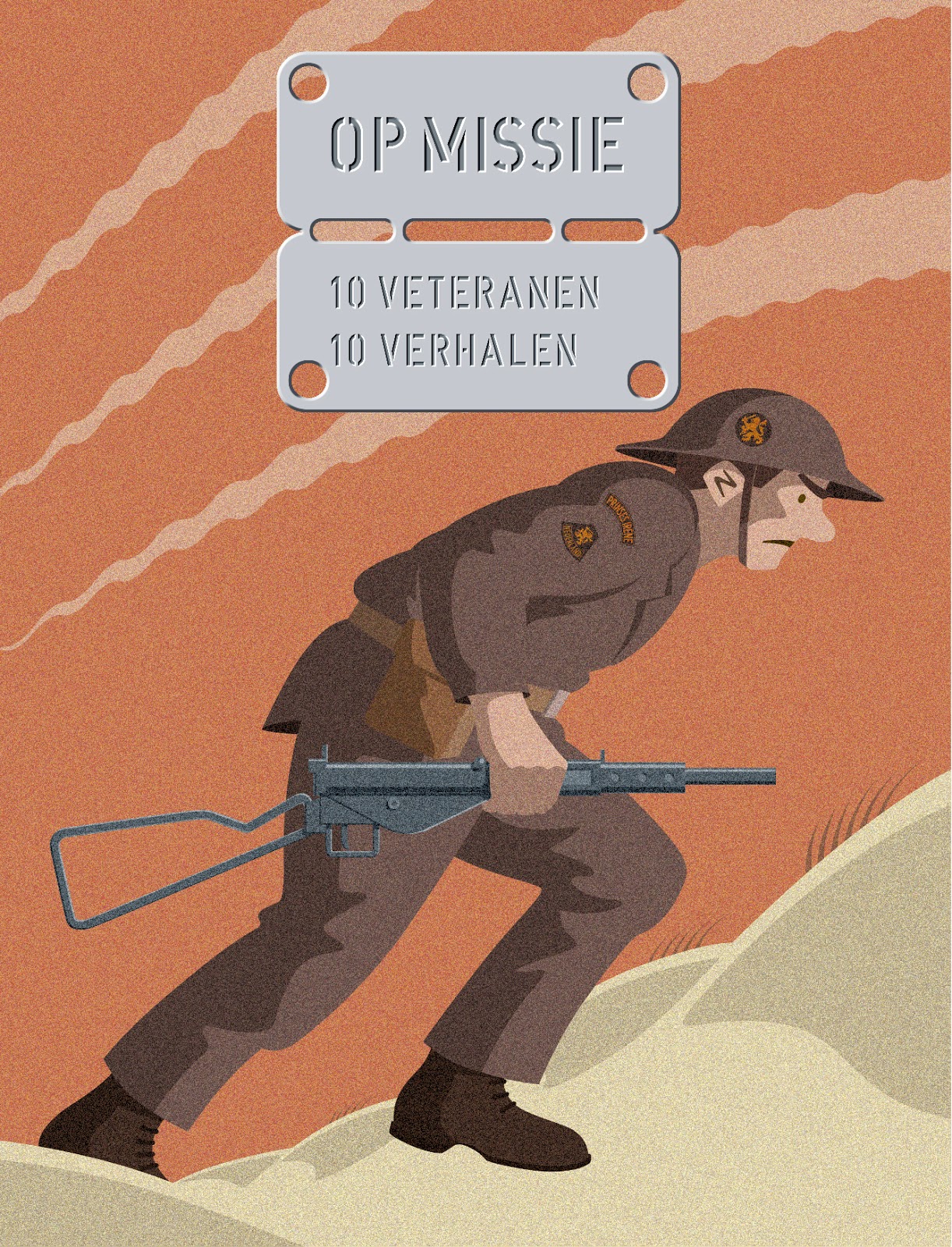 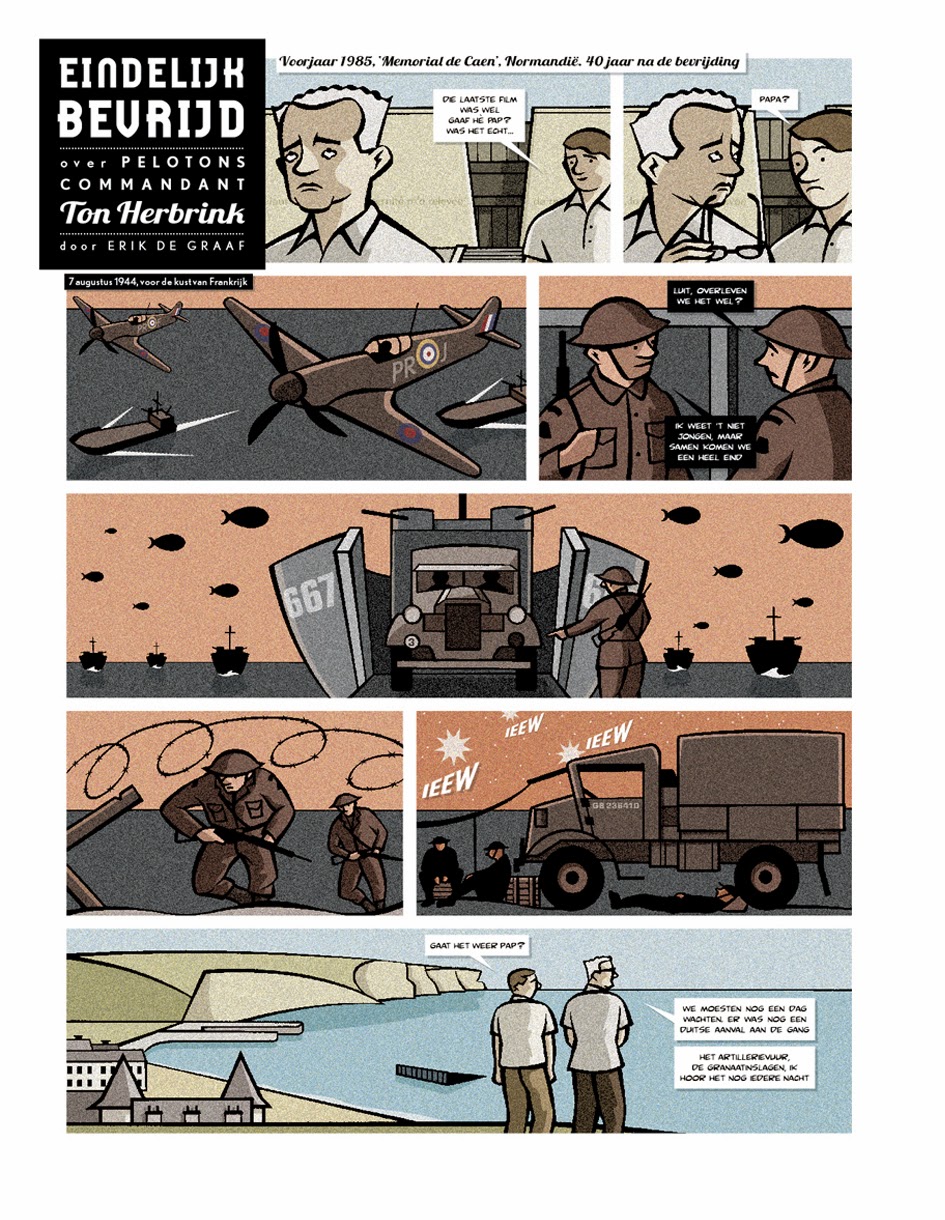 Currently I'm working on a special limited edition, a Leporello, with my story, extra drawings and signed and numbered. More about it soon.

Written by Erik de Graaf Comics on 12:49 PM No comments:

Coming sunday, 27th of april a series of portraits of graphic novels authors starts on Dutch TV in the art-program Avro's Kunstuur:

I will be the first guest and talk about 'Scherven' and the sequel I'm currently working on.

Beginnig of March 'Eclats' ('Scherven' in Dutch) appeared in French comics-stores. Since then I've received quite some beautiful reviews and done an interview with Klare Lijn International:

Here are some links to the French reviews:

Written by Erik de Graaf Comics on 1:29 PM No comments:


Comicspromotor Gert Jan Pos portrays one artist every week. Recently he made a series of pictures of me, in the typical Dutch landscape you find in my stories. This one was our favorite, because of the landscape, the rhytm and the light. I think it's beautiful.
Written by Erik de Graaf Comics on 12:03 PM No comments:

'Scherven' in French and new pages.

Next september La Pasteque will publish the French version -Éclats- of 'Scherven' in Canada. In november you can find in France. I proudly present you the cover.

Currently I'm also working on the sequel and end of 'Scherven 2'. Here are some pages.

Written by Erik de Graaf Comics on 9:25 AM No comments:

Two magazines published interviews about my Marten Toonder drawings. First it was Stripschrift with a two page article and a cover illustration.

Last week 'Goede Papieren', the magazine of 'Letterkundig Museum' came out with a 4 page-interview.

Written by Erik de Graaf Comics on 11:59 AM No comments:

Are you interested in the illustrations I've made about Marten Toonder? There's a nice booklet in which they are collected and each of the illustrations are available as a Piezography, signed and numbered.
If you want to order something, please send me an email:
erikdegraafcomics@gmail.com

The booklet, containing all 6 illustrations with real cut out windows.
Price: Euro 7,50 (without shipping costs)
(I will of course sign it for you)

Written by Erik de Graaf Comics on 7:22 AM No comments:

100 years ago the famous Marten Toonder, creator of f.i. 'the Bommel-stories' was born. At 'the Letterkundig Museum' The Hague an exhibition about his life and works runs till the 31th of january 2013.
Marten Toonder was a man with 2 sides: artist and writer, loner and actor, realist and magician... I was asked to catch those characteristics in 6 illustrations on the most important themes of his life:
his childhood in Rotterdam, Toonderstudio's in WW2, his characteristic use of language, care for the environment, his Bommel-stories and his life in Ireland.
In every illustration I created an inside and outside world, which contain a kind of contrast.
The illustrations are printed on 100 x 70 cm's in the lenticular technique, which gives a magical effect, because details change when walking by.

If you like you can order the illustrations as Piezographies (that's not a Lenticular, but a beautiful Full Color print) , signed and numbered, on 70 x 50 cm's. The museum also published a booklet, in which the window of each illustration is cut out.
Interested in a piezography or the booklet? Please send me an email: erikdegraafcomics@gmail.com

Care for the environment

the Booklet
Written by Erik de Graaf Comics on 5:36 AM No comments:

Here are my last two strips for the 'Bovenbazen' story in NRC. All strips will be published as a collection by 'de Bezige Bij'. Presented at the opening of the 'Toonder-expo' at 'Letterkundig museum' on the 11th of october and in store half of october. I really liked working on it!

Written by Erik de Graaf Comics on 6:46 AM No comments:

Erik de Graaf Comics
Netherlands
Erik de Graaf is a Dutch graphic novel artist. He has already published 6 books. On his blog you can follow him in his comic adventures. In real life, Erik is a Graphic Designer.